摘要： If you told me you own all of the bitcoin in the world and you offered it to me for $25 I wouldn’t take it. 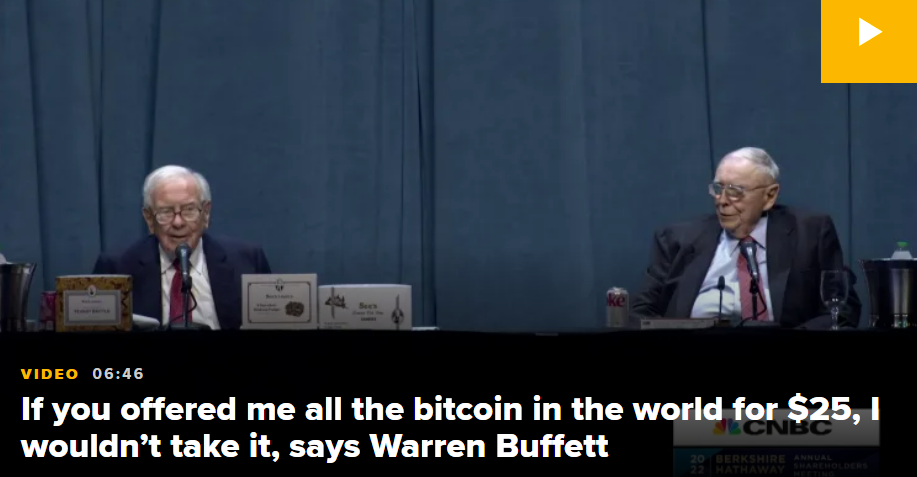 Bitcoin has steadily been gaining acceptance from the traditional finance and investment world in recent years but Warren Buffett is sticking to his skeptical stance on bitcoin.

He said at the Berkshire Hathaway Annual Shareholder meeting Saturday that it’s not a productive asset and it doesn’t produce anything tangible. Despite a shift in public perception about the cryptocurrency, Buffett still wouldn’t buy it.

“Whether it goes up or down in the next year, or five or 10 years, I don’t know. But the one thing I’m pretty sure of is that it doesn’t produce anything,” Buffett said. “It’s got a magic to it and people have attached magics to lots of things.”

Even bitcoin enthusiasts tend to regard the cryptocurrency as a passive asset that investors buy and hold and hope to see increase in price over a long period. Buffet himself commented that there’s “nobody” that’s short on bitcoin, everyone is a long-term holder.

For more sophisticated crypto investors, some coins offer a way for them to use their crypto productively — either through lending, or as collateral — to create additional portfolio benefits. However, they’re still young, highly speculative and haven’t broken into the mainstream like bitcoin.

Buffett elaborated on why he doesn’t see value in bitcoin, comparing it to things that generate other types of value.

“If you said… for a 1% interest in all the farmland in the United States, pay our group $25 billion, I’ll write you a check this afternoon,” Buffett said. ”[For] $25 billion I now own 1% of the farmland. [If] you offer me 1% of all the apartment houses in the country and you want another $25 billion, I’ll write you a check, it’s very simple. Now if you told me you own all of the bitcoin in the world and you offered it to me for $25 I wouldn’t take it because what would I do with it? I’d have to sell it back to you one way or another. It isn’t going to do anything. The apartments are going to produce rent and the farms are going to produce food.”

Investors for years have been puzzled over how to value bitcoin in part because of its potential to serve different functions. In Western markets it has been established as an investment asset, particularly in the past year as rates and inflation have been on the rise. In other markets, people still see enormous potential for its use as digital cash.

“Assets, to have value, have to deliver something to somebody. And there’s only one currency that’s accepted. You can come up with all kinds of things — we can put up Berkshire coins... but in the end, this is money,” he said, holding up a $20 bill. “And there’s no reason in the world why the United States government… is going to let Berkshire money replace theirs.”

Both Buffett and Charlie Munger have made hostile comments toward bitcoin in the past. Most famously, Buffett said bitcoin is “probably rat poison squared.” Munger doubled down on that sentiment Saturday.

“In my life, I try and avoid things that are stupid and evil and make me look bad in comparison to somebody else – and bitcoin does all three,” Munger said. “In the first place, it’s stupid because it’s still likely to go to zero. It’s evil because it undermines the Federal Reserve System... and third, it makes us look foolish compared to the Communist leader in China. He was smart enough to ban bitcoin in China.”